This page contains guidance to implementers and is not part of the normative-track FHIRcast specification.

FHIRcast ties SMART as the authnz layer together with WebSub for subscription and event notification.

FHIRcast builds on SMART by introducing a new syntax for standard OAuth 2.0 scopes, as well as two new SMART launch parameters of hub.url and hub.topic.

WebSub is a W3C RFC designed for the distribution of web content through a standardized web hooks architecture. FHIRcast uses WebSub to allow clients to subscribe and unsubscribe to the Hub and, for the Hub to notify subscribers of events.

Unlike WebSub, FHIRcast requires that both the Hub and the subscribing apps endpoints are exposed over https.

The below flow diagram illustrates each of the interactions. 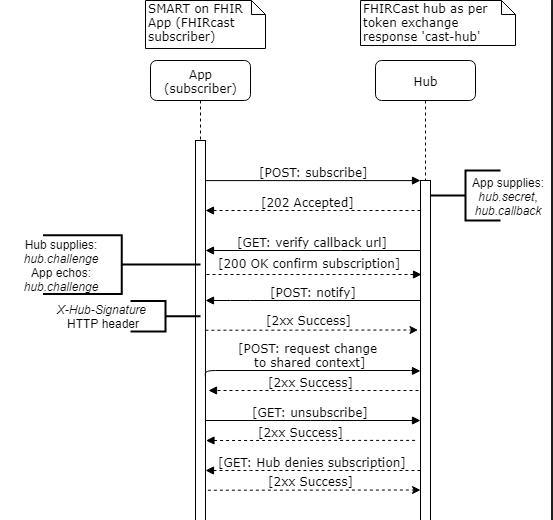 How does the subscriber authenticate to the Hub?

How does the Hub validate the subscriber?

This flow diagram describes the actors and actions. 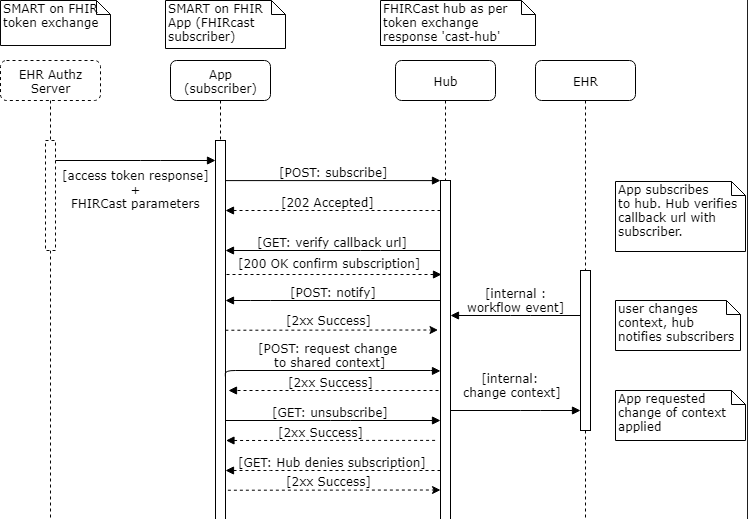 The WebSub RFC defines specific security considerations, including the below, which are listed here for emphasis or elevation from optional to mandatory. * Subscribers must communicate with a Hub over https. * Hub must reject unsecured http callback urls. * The subscribing app's hub.callback url should be unique and unguessable. * Subscribing apps must provide a hub.secret and validate the X-Hub-Signature in the notification message. * Hubs must reject subscriptions if the callback url does not echo the hub.challenge as part of the intent verification GET. * When computing the HMAC digest with the hub.secret for the X-Hub-Signature HTTP header, Hubs must use SHA-256 or greater and must not use SHA-1. * For each subscription, the hub.secret must be unique, unguessable and securely stored by both the Hub and the app. * To prevent a subscriber from continuing to receive information after its authorization has ended, if using OAuth 2.0, the Hub must limit the subscription's lease_seconds to be less than or equal to the access token's expiration timestamp.

In addition to the web hooks communication pattern, the FHIRcast community is experimenting with the use of websockets for event notification. Below are some incomplete considerations for a potential websockets implementation.

The WebSockets standard defines an Origin header, sent from the client to the server and intended to contain the url of the client. Subscribers using websockets may be running in a browser, in which case the browser enforces origin reporting to the Hub, or native apps in which the origin reported to the Hub can not be trusted. Therefore, a Hub exposing a websocket connection MUST not rely upon the origin sent by the subscriber.

While native app subscribers can send any standard HTTP headers, notably including Authorization: Bearer, browser-based subscribers are limited to only HTTP Basic Auth or cookies. Therefore, the typical use of the OAuth 2.0 access_token for bearer authentication does not consistently work with websockets. FHIRcast describes a "ticket"-based authentication system, in which the hub.topic provided to the subscriber as part of the secured SMART app launch serves not only as a unique session identifier, but also as an "authorization ticket". This authorization ticket effectively acts as a bearer token. The Hub should therefore take care to generate opaque and unique hub.topic values.